How does a someone go from a career as a chef to one of connecting waiting children in foster care with a family? Short story is, she signs up for an Embracing Purpose class where God sparks a fire in her belly that she can’t ignore.

The longer story starts with conversations Jacquelyn and her husband had had about adoption. They were both ‘down with it,’ as the saying goes, but little did they know that one day they would be fully immersed in the world of “waiting children.”

“Early in our relationship my then-boyfriend now-husband Patrick told me he always knew that God wanted him to adopt a child one day. And I’d always wanted four children, so I was fine with adopting one. Then when I joined an Embracing Purpose class my small group included a woman who was fostering three children and another who served as a respite care-giver for foster families.

“Every week I peppered them with questions and then came home to talk to Patrick about everything. At the same time, I was becoming increasingly dissatisfied with my job as a managing chef for a local restaurant. I loved parts of it, but found I was increasingly focused on myself — my plans for making the restaurant run more efficiently, my goals, and my accomplishments. The more self-focused I became, the less I was drawn to the work itself. I sensed there was something more for me.”

Among the local agencies operating in the foster care-adoption arena is The CALL, The Children of Arkansas Loved for a Lifetime, which Jacquelyn’s church had supported for many years. On a lark one evening—or at God’s urging—she emailed the statewide director, Laurie Currier, asking if there were any job openings. The answer she received was, “Yes!” One had just opened up and they had not even advertised for it yet.

Soon after she sent the email Jacquelyn’s Embracing Purpose class was coming to a close. They met for our final session and shared a meal with other small groups going through the course. That evening Jacquelyn told her group about the email exchange she’d had with director of The CALL. Cara, her small group leader, replied, “Well, Laurie Currier is right behind you. She’s a small group leader!”

Jacquelyn continued, “How random is that? The woman I’d just emailed was in the same class. So, before the evening ended I introduced myself to her, and Laurie was as surprised to see me as I was her.”

After finishing EP in December, Jacquelyn now has a new job with The CALL, one she loves! “Working here is awesome! We work together as a team and bathe everything we do in prayer. It’s great to work at a place where we can talk about our faith openly. In fact, faith informs everything we do here!” 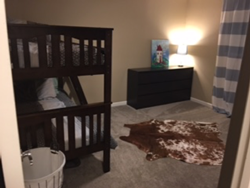 Not only has her work day changed dramatically but Jacquelyn and Patrick are in the process of being certified as foster care parents. They’ve already decorated and furnished their spare bedroom for what they hope will be a pair of siblings between the ages of 2 and 14.

As Jacquelyn shared her story with me, her passion was palpable. “I would never have thought this was in my life plan, but it’s so much better than I could ever have imagined! My focused has turned from myself and what I want to the needs of waiting children and what God wants. I’m suddenly so much more dependent on Him!  So many people you talk to about fostering tell me that they could never do it because it would break their heart to give up a child they’d come to love. But aren’t the children’s lives so much more important than my –or our –discomfort?”

For Jacquelyn and Patrick, called by God for this very purpose, the answer is clearly, “Yes!”